However, the solventless composite technology is not mature, and there are still some technical risks that are easily overlooked in the application for a flexible packaging company, leading to quality problems. Now we summarize three common risk control points of solvent-free composite technology. 1. The Technical Risk Of Increasing A Glue In Solventless Composite

Solvent-free composite adhesive with A glue and B glue, the adhesive mixing ratio is generally the weight ratio of A glue and B glue, rather than the volume ratio of both. The mixing ratio of the binder is usually determined by the adhesive manufacturer, as the proportion of the binder in different brands is generally different. The common ratios of A glue and B glue are 100: 80,100: 75,100: 50,100: 45. However, in the actual solvent-free composite production of flexible packaging companies, the ratio of the two-component adhesive will be disordered, which will affect the solventless quality of flexible packaging products.

After printing, solvent-free compounding, the flexible structure of OPP / VMPET / PE has no quality problems.

The structural composite flexible bag is a low viscosity-free solvent-free binder brand and the proportion of A glue and B glue in actual composite production is 100: 67. When analyzing the cause of failure, we find that the bag is curled and the inner binder is not dry. Originally, because the composite film maturity is incomplete, prolongs the maturation time and then cuts into a bag. The problem of bag curling still exists and the opening performance has also deteriorated.

Combined with a ratio of A glue and B glue, it is not difficult to find that the bag is mainly caused by the excess of the A glue, because the solvent-free composite film is usually large and the effect of prolonging maturity is not obvious, water must be introduced into the cross-linking curing reaction with the -NCO.

The much more efficient methods are to rewind the composite film roll on a slitting machine and then increase the humidity of the workshop environment to absorb some moisture between the layer and the surface. The composite film, during aging, water will penetrate into the adhesive layer and reacted with an excess-NCO cross-linking curing reaction, so that the self-adhesive layer will be further completely cured, thereby effectively release the curling of the flexible packaging bags.

A certain amount of linker is added to the film blow molding for reducing the friction between the film and the film, the film and the device, so that the surface of the film will be smoother, in order that the composite film operates successfully in the production process. Under normal circumstances, an excess sliding agent has added appropriately in the PE film, which can solve the phenomenon of abnormal increase in the friction coefficient of the solvent composite film after a certain extent, but this can also cause peel strength to be weakened, which is serious. When the aging is completed, the peel strength of the composite film is exceeded and in most cases, the peeling strength is reduced during the process of placing the composite film or during the cycle of the flexible packaging.

The composite structure is a BOPA / PE film

Main parameters: a brand solvent-free adhesive, the amount of glue is 1.5 g / m2, aged at 40 ° C for 24 hours. The tracking and detection data of the peel strength of the composite film is as follows:

After the complex layer is peeled off, the surface of the PE film has a mist-like substance that can be wiped off.

It is closed to the final test data indicating that the peel strength of the composite film has reached a stable value.

The migration of the solventless adhesive in the PE film produces a slipping agent, which is the main reason for the decrease in the peel strength of the composite film. We recommend a solvent-free adhesive. Add the formulated slipping agent to the formulation, so that the friction coefficient of the PE film in the solvent-free compound can be solved, and the problem of decrease in peel strength can also be solved.

3. Pay Attention To Identifying The Smell Characteristics Of The Solventless Adhesive

There are many factors that produce scent in the flexible packaging bag, such as residual solvent, ink resin, thin-film raw material resin, adhesive, etc. Although there is no solvent residue in a solventless composite, the resins and formulations in the solventless adhesive have a certain odor feature and some have effects after composite curing, even after the packaging. For flexible packaging companies, it is necessary to pay attention to the identification of the solventless composite film after the smell and prevent the problem.

a. In GB / T 10004-2008 standard, the detection method of packaging sensory indicators is specified, which is opening the box and lining the packaging film and immediately detect the smell.

b. Usually take a certain area of the composite films, cut into a 500 ml glass bottle, baked for 30 minutes at 60-80 ° C for detecting smell. It is also possible to seal the package in the air or actual content, rotating at a temperature of 50 to 60 ° C, tearing the package, and feel whether there is odor.

The odor of the composite film is mainly from a solvent-free adhesive. Therefore, the odor feature of the general solventless adhesive can be identified by the following method.

a. Take a certain amount of A glue and B glue with different brands for sensory testing and comparison.

b. Add a mixed solvent-free binder according to the specification to the glass bottle. Plastic film is placed in the bottom of the bottle and the cured adhesive is easily taken out and the crosslinking reaction is under 40-50 ° C. After an hour, the odor characteristics are determined. This method is more suitable for practical applications, including the odor characteristics of the resin itself. 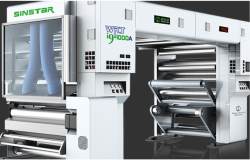 Solventless lamination technology adopts a solvent-free adhesive instead of solvent-based adhesive, which can avoid VOCs emissions from the source. It has the advantages of healthy, safety, low energy consumption, saving resources and production cost. What Is Solventless Lamination Machine An Article To Learn The Advantages, Problems And Development Trend Of Solventless Adhesives

Solvent-free laminating adhesives are more widely used in the flexible packaging industry, with eco-friendly, safety and low cost. This article will introduce the advantages, problems and development trends of solventless adhesives.